According to the Chinese lunisolar calendar, The Chinese New Year 2022 or the Spring Festival starts on February 1st and for over 1000 years it has been the most important and widely celebrated holiday in the world.

Associated with many fascinating legends and customs, it is a time for honoring deities and ancestors, full of prayers, offerings, and other acts of devotion.

The date of the Festival fluctuates but falls in either January or February. Chinese Year 4717 starts on February 1st of 2022 and it’s the Year of Water Tiger .

Chinese New Year is also called “Spring Festival” and “Lunar New Year” because it falls in spring and is dated based on the Chinese lunar calendar.

The Tiger is the third year in the 12-year cycle of the Chinese zodiac. After this lunar year, the next year is Year of the Rabbit. The tiger is a “yang” and also a water sign. The closest Western correspondent sign is the Aquarius.

According to legend, the order of the Chinese zodiac animals representing the year has been decided by a race. The Tiger is the third animal out of 12 Chinese zodiac signs, while the Pig is the last.

The public holiday in China for celebrating the New Year lasts 15 days. The holiday is the cause of the largest annual mass human migration in the world, with a number of over 3.6 billion trips made in China.

The Chinese mythology claims that Nian was a creature that lived under the sea or on top of mountains. It is said that every year at the beginning of the Spring Festival, the Nian would come out of hiding to eat the crops and sometimes the villagers. People discovered how to scare him away with red lanterns and explosions of fireworks, which led the traditional New Year’s celebration.

Fireworks, traditional lion and dragon dances, lanterns display and street performances mark the 15 days festival, culminating with the Lantern Festival, which takes place on the last day of the Chinese New Year.

The bamboo used to be set of fire to keep evil spirits away, which might have been giving rise to the present day fireworks. The Lunar New Year is celebrated worldwide in countries with big Chinese communities, including Korea, Vietnam, Thailand, Indonesia, Singapore, and Malaysia.

The Communist Party under Mao Zedong, which took power in 1949, tried to forbid all religious, feudalistic or superstitious aspects of the holiday.

What are some traditions during Chinese New Year?

In Chinese and other Asian cultures, a red envelope is a monetary gift, usually given to children on New Year for prosperity and good luck. It is customary that both the envelopes and the money inside are brand new.

Firecrackers and fireworks are set off at midnight to send away the old year and welcome the new one.

On New Year’s Eve, at midnight, the doors and windows are opened to let the old year go out.

Red is the color associated with fire, which is thought to ward off evil spirits, this is why many Chinese people wear red.

Buying gold to welcome the New Year is a common practice in China. Making amends, reconciling with people, avoiding offenses, and reestablishing relationships and friendships are important things to accomplish before the New Year.

Silk, paper and bamboo dragons are part of the New Year celebration. Dragons are legendary creatures that are helpful and friendly. They are known to scare away evil spirits, bring wisdom, good luck, wealth and prosperity.

A Hoi Nin prayer is said by business people on the second day of Chinese New Year to attract good luck and prosperity in their business for the year.Houses are cleaned out thoroughly before the New Year arrives to “sweep out any bad luck”.If possible, all the people who owe money try to settle their debts before the New Year, as they are considered a bad sign. Borrowing or lending money should also be avoided on New Year, anyone doing so it is said to borrow and lend money all year round. Hair washing is forbidden on New Year’s Day, as it is said to wash away good luck for all the rest of the year.It is also recommended to avoid using scissors on New Year’s Day, so you don’t accidentally cut your luck. Crying should be avoided at all cost since it is believed that if you cry on New Year’s Dar, you will do so all year.

The superstitious Chinese people can consult an Almanac in order to find out which is the best time and direction to leave the house on New Year’s Day.

What Foods are Served on Chinese New Year?

The long uncut noodles represent longevity, which is why it’s one of the main dishes on New Year. Other dishes that bring luck and prosperity are made of fish. Any kind of fish or bird is traditionally served whole for Chinese New Year, including the head and feet.

On New Year’s Eve dinner reunion, 8 courses are usually served because 8 is considered to be a lucky number.

To attract wealth, tangerines and oranges are placed in fruit bowl around the house.

According to the Chinese symbolism, lobsters symbolize dragons, while chickens symbolize phoenixes and together, they symbolize the unity of the family. 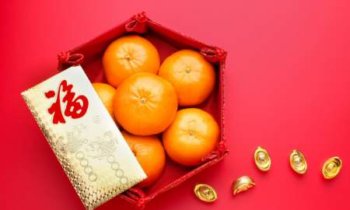 The Tray of Togetherness is a platter full of sweets used traditionally by families to welcome visiting guests and around the Spring Festival. Watermelon seeds are also a good choice, as they are a symbol of fertility.

In Hong Kong, horse racing is a popular event of New Year’s Day.

Adolf Hitler, Marilyn Monroe, Tom Cruise,Rafael Nadal are just a few of the celebrities born in the year of the Tiger.

The world record for most text messages sent in a day is broken each year during Chinese New Year.

The cost of celebrating the New Year for 79% of the Chinese residents is greater than one month’s salary.